The Role of the Highest Courts of the United States of America and South Africa, and the European Court of Justice in Foreign Affairs. 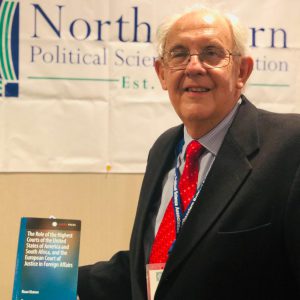 Present at the Northeastern Political Science Association meeting in Philadelphia, PA. on 7 November 2019

This chapter sets the scene for the forging of a new path in Foreign Policy Analysis (FPA) thinking and analysis. The primary purpose of the research is to analyse the role and involvement of the judiciary in the foreign affairs of the USA, South Africa and the EU. In FPA literature the judiciary, as an actor in foreign affairs, is not dealt with substantially and appropriately. Restraint, pessimism, and concern about overreach by the executive when it comes to foreign affairs and national security are trends embedded in recent rulings. Decisions critical of the executive—especially on such presidential overreach—are no longer exceptions when that constitutional transgression is at stake. The mood of the judiciary on these issues has shifted. The judiciary is credited with being the constitutional compass. Consequently, a particular niche presented itself to explore and recognise the role of the judiciary in foreign affairs—not in a decision-making role but rather as a force affecting and even restricting and directing the executive in foreign affairs. After an examination of how the four selected Courts have influenced foreign affairs, a discussion follows of why the judiciary’s rightful place in the process of foreign policy decision-making has to be acknowledged. What is explored in the ensuing chapters serves as a clarion call to scholars of FPA. These chapters dealing with the four Courts provide adequate evidence to substantiate the conclusion that the Courts do influence foreign policy and have a role in foreign affairs.

I trust that, as the opinions quoted below indicate, the book will be an important contribution to the scholarly literature on foreign policy analysis and it future consideration of the judiciary.

In her Foreword Prof. Marijke Breuning* declares that the book

My book, The Role of the Highest Courts in America
now available click here

or if you want to get in touch, fill out the form below.